The weather forecast spell casting statistics (for 2017-2020) have been overdue for some time. Within five months of year 2021, it has been cast already 2133 times!

Ever wondered what it would be like to run a communist society, in Your authoritarian regime? How to be self sufficient, and not to rely any capitalistic influences (such as paying taxes from wages, paying for health and child care, tuition fees for universities, intentional unemployment to dump salaries, own cars on work trips, entry fees for swimming pools and cultural enrichment)!

Now you can try with Workers & Resources: Soviet Republic, and add some Finnish flavor to this game with this mod:

“In the 1960s Finland got its own share of people’s revolution, and being such a good friend to the Soviet Union, a small municipal Sysmä in the county of Häme, voted for Sexit. Local people wanted to achieve great success, and marvelous future all by themselves.

Finland decided to acknowledge this social experiment, and created a quarantine zone around Sysmä. North eastern town Kangasniemi was set to be the control/staging point for more capitalistic western Finnish society, while south western Tampere was its socialistic counterpart.

The landscape of this small piece of Finland, next to numerous lakes of Päijänne in the forest filled landscape, with ice age formed gravel ridges, is now a stage for a socialist republic day dream.”

These statistics have been overdue for two years. But here they are. 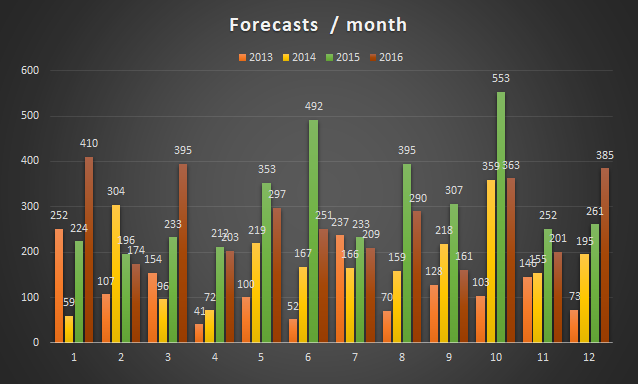 Greyhawk weather forecaster is up and running. It was not working for three weeks, because service provider had updated the PHP version, rendering the tool unoperable. The issue is now fixed. Yeaa!

Big thanks goes to David for reporting the issue in the first place. Happy forecasting!